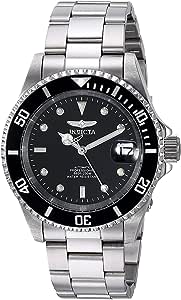 Cons:
1. Looks a lot like a Rolex Submariner
2. A bit tall on the wrist
3. Servicing is tough in India for Invicta watches if something goes wrong
4. A Little heavy on the bracelet
5. Loom is very weak on the markers.

Some people have complain about quality issues like misaligned markers or bezel, hands fell off etc. At the time of posting this review it’s been almost a month of daily use and I’m lucky to not have any issues in my piece.

Verdict: It’s an absolute value for money (at least for what I’ve paid) and you can definitely go for it if you like the design.

Loooong Review:
To be honest I’m a huge horological nerd and I absolutely love watches. I follow almost all watch communities on the internet and I have quite a decent collection of watches myself including Gshock, Seiko, Timex, automatic, manual wind and quartz movements etc. I always wanted to have an automatic diver in my collection and my first choice was a Seiko SKX which is a legendary diver watch. But when I searched I couldn’t find SKX on any website or retail stores in India. (Though later I found that Amazon is selling it in India but for an absurd price of more than 30k where as you could buy it in US for somewhere around 200 dollars) So I had no choice but to find an alternative and I came across Orient Ray and Mako line of watches which are absolutely gorgeous and original in design but they cost around 14k - 17k on Amazon India. Meanwhile I had my eyes on this Invicta Prodiver 8926OB even though a lot of people in watch community dislike Invicta as a company, but like this particular watch model. So when I checked, the prices were fluctuating between 7k to 9k and I was not willing to pay that money for an Invicta, but recently the prices dropped to around 5800 bucks and I jumped on it. Honestly, there are no regrets since.

The dimensions are, 40mm dia bezel excluding crown, the lug width is 20mm. It wears marvellously on smaller wrist like mine even though it wears a little bit taller on the wrist. It has a 120 click rotating bezel and the action on the bezel is very solid and easy to rotate thanks to coinage on the bezel. There are applied markers and applied winged Invicta logo which looks really good and the hands are very Rolex inspired Mercedes hands, both have loom but the loom on the markers are very dim when compared to loom on the hands. There is a loom pip on the bezel at 12 o’clock position that helps in orientation of the watch in the dark. The watch has a mixture of brushed and mirror finishes that is done impeccably well and it gives a beautiful lustre to the watch especially on that aluminium insert of the bezel and glossy black dial of the watch. There is a cyclops on the mineral glass exactly above the date window that magnifies it for improved legibility. Some people don’t like the cyclops but personally, I don’t mind it. The crown is a screw down crown with crown guards. I’m really impressed with the crown on this watch. It has a perfect size to screw, unscrew or wind the watch with ease, and it is signed with Invicta cross that aligns perfectly when completely screwed in. Another impressive thing in this watch is the display back, it shows the automatic movement in all its glory.

Speaking of the movement, it is the best part in this watch. It is a Japanese caliber NH35A movement, basically it is an unbranded version of Seiko movement caliber 4R35 which can be found in sub 30,000₹ Seiko watches. It is most popular automatic movement in micro brands too. This movement is automatic of course(for those who don’t know it doesn’t require a battery and works on your movements) but it has hacking(seconds hand stops when crown is pulled out) and manual wind functions as well. According to the official site it has an accuracy of -20 to +20 seconds per day but I’m happy to report it is given me an impressive +7 seconds per day.

The bracelet which it comes on is completely solid with brushed and mirror finishes. End links are hollow but it is expected in this price range. I must say it looks really good on the bracelet but you can most definitely order some nato straps (preferably on AliExpress 😬 sorry amazon, you lack collection in this regard) and dress it down a bit. And because of the Rolex aesthetics, this watch is a strap monster. It looks freakin amazing with any strap you put it on.

I must say, I’ve washed clothes wearing it, I’ve been to weddings with it, I’ve been on a bike ride with it, I went swimming with it, you name it. I’ve even dropped it once accidentally but it did not stop ticking.

I’ve tried to take and post as many pictures as I can for you to decide but I gotta say it’s one of the best wrist watches at the price range. Absolutely go for it if you like the design and if it suits your budget. At the end of the day if something brings you joy and happiness, it’s worth it.

Tzar
4,0 su 5 stelle The name's........
Recensito nel Regno Unito il 2 gennaio 2019
Acquisto verificato
So, a few elephants in the room to be dealt with, particularly from the watch snobs in the forums. As soon as you mention this watch you're belittled because it takes most of its design inspiration directly from a submariner and you can't afford the 6 grand. And also most who buy the watch will put a Bond NATO strap on it. I'm guilty on both accounts. (And i really dislike wearing steel bracelets). The same snobs also deride anyone who buys a quartz powered watch.(I have 12 or so). So then you go and buy this automatic and still can't win.

I really like this watch. Yes there's a few design flaws but it's under £70 and the Seiko movement is a tried and tested reliable automatic.
Obviously the overall design has the look it was going for. I don't particularly like the huge Invicta stamped on the side but truthfully once on it's difficult to know its there because of the polished finish. The bezel rotates anti clockwise 120 clicks. It's quite stiff but with no play at all. The hands are easy to see and the second hand has a nice sweeping motion at 6 ticks per second (21,600 an hour).
The crown is screwed down to help with water resistance and once undone can be hand wound and then the time adjusted as normal. After i wound it for the first time and removing at night it hasn't stopped. Tolerance is huge at something like +- 40 seconds but after a week its still dead on.
The lume is pretty awful and if you really stare at the cyclops over the date you can tell it's a little wonky. I removed the bracelet straight away but it didn't feel quality like the rest of the watch. Even though the case measures 40mm the actual face only measures 28mm. For those (like me) who like the fashion of oversized watches this can feel a little small at first at a traditional size. However, it became less noticeable after a short while.
Weighs 154g with the bracelet and 90g with the NATO.

Terrible lume.
Dodgy cyclops.
Can look a little small.
Less than cheap feel to the bracelet.

RC
5,0 su 5 stelle Go ahead... you know you want to
Recensito in Canada il 21 marzo 2019
Acquisto verificato
I'm a watch collector and have worn a Rolex for over 20 years, and have several Omegas.
(I now have 3 Invicta Pro Divers)
I'd read a lot of negative things about Invicta watches on the watch collector forums.
Well, I can tell you, it's all a lie.
Just a bunch of "watch snobs" (that have paid way too much for their watches and will be paying for them for the next 10 years) razzing an affordable brand because it dares to look like a Rolex Submariner.
(Umm... so do a bunch of other watches by other manufacturers)
Invicta is a perfectly fine brand that seems to be very well-built.
The automatic watches have Chinese-made Seiko NH35A movements, which are in a number of their popular diver watches, as well as many other watch brands.
It's a reliable, hack-able movement that won't cost you your first born when you need to get it repaired or serviced.
The watch is heavy and sturdy feeling.
The lume isn't terribly great, but I've found this on a lot of watches, anyway... and my Rolex's lume wasn't that terrific, either.
So... for the price... you're getting a really good, reliable watch that looks great.
Is it a Rolex Submariner?
No.
But... it also isn'y going to cost you the price of a new car to get this beauty on your wrist.