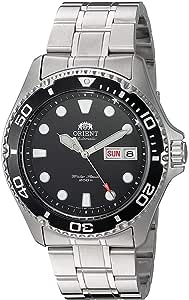 Mr. A. Brown
5,0 su 5 stelle Remarkable automatic watch for the price
Recensito nel Regno Unito il 23 novembre 2020
Acquisto verificato
I once looked at a Certina automatic dive watch in a jeweller's shop and was disappointed with the looseness of the bezel. I also realised the £650 asking price was more than I wanted to pay for an everyday watch that will get worn with jeans and T-shirt around the house and down the pub. I have a more expensive Ball chronometer which is lovely, but a bit too blingy and dressy for everyday wearing.

I had seen Orient watches briefly in a couple of stores in Japan a few years ago, and always wished I'd bought one while I was there. Anyway, I decided to take the plunge and buy this, satisfying my 2 itches to have an automatic diver, and an Orient watch, at the same time.

First of all, this isn't as good as a Tag. But it's not meant to be.
Yes, the links are not solid. Yes, they have pins instead of screws. Yes, the clasp is made from sheet metal rather than diecast or machined. So yes, it does squeak and rattle a little.
Yes, it's a flat mineral glass crystal without any anti-reflective coating, rather than a domed sapphire crystal like you'd get on an expensive Swiss watch.
Yes, the day and date don't snap to their new positions at midnight, they slowly shift between about 11pm and the wee hours of the morning.

It's running less than +10s per day, barely outside of Swiss chronometer limits.
The bezel is nice and tight, but still easy to adjust.
The bracelet has good adjustment including 4 micro-adjustment positions, and it doesn't pinch hairs.
The body of the watch feels solid and weighty, as an automatic sports watch should. This is not a fragile delicate thing to be protected, it's for wearing every day and getting on with life.
And it looks pretty good - the photos on here don't do it justice. The hands are perfectly flat and polished beautifully, the combination of brushing and polishing on the bracelet is nicely done.

One gripe that others have mentioned is the crown guard does slightly too good a job of guarding the crown - I agree, it is slightly fiddly to wind in. But really, I'm splitting hairs because this is a fantastic watch for the money.

This is my first Orient watch, and if its long term durability is as good as its initial quality, then it won't be my last.

Hency
5,0 su 5 stelle An excellent watch
Recensito nel Regno Unito il 19 ottobre 2020
Acquisto verificato
I purchased this watch to replace a poorly performing S***O which I have always been fond of and actually own four. The overall impression of this timepiece is extremely pleasing. It performs accurately, it has impressive features and looks very nice on the wrist. Okay, it is a little heavier but having worn it for a couple of hours it soon becomes unnoticeable. I would recommend this watch so please do not be put off by the relatively cheap price. The mechanism is made in house in Japan, completely separate from S***O who are owned by the same company. It can be hand wound and is water resistant to 200 metres...at this price! If you prefer to pay thousands for an equivalent go ahead but I would suggest you save your money and purchase one of these.
Leggi di più
Segnala un abuso
Traduci recensione in Italiano

FFM
1,0 su 5 stelle Disappointing
Recensito nel Regno Unito il 21 agosto 2019
Acquisto verificato
The watch has been gaining around 1 minute every two days since the day I received it. This is the second time I have this kind of experience with an Orient automatic watch. I'm going to return it.
Leggi di più
Segnala un abuso
Traduci recensione in Italiano