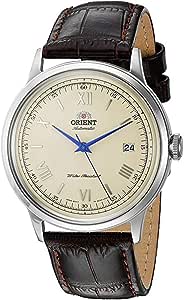 Oxfordshire lad
5,0 su 5 stelle So, my first Bambino….but not my first Orient.
Recensito nel Regno Unito il 17 agosto 2018
Colore: CreamAcquisto verificato
I’ve been into watches on and off for years, but recently have re-kindled my interest and started looking around at different models etc. I’ve never been able to invest serious money in high end Swiss makes, but as this is only a small part of the horological world, it really hasn’t impacted upon me or my choice.

I have usually stuck with Divers and Chronographs, - large chunky watches - mainly because of the look. I’ve owned several makes, from relatively expensive brands such as Omega, Longines and TAG (I still have a Aquaracer Chronograph from the mid 2000’s) through a whole plethora of G Shocks (I used to work outdoors a lot) and other Japanese makers such as Seiko and Citizen. Other brands along the way include Tissot, Fortis, Hamilton and even some micro brands too.

As I’ve got older, my preferences have started to change, and as I’m in an office based role now, some of my watches simply looked out of place with suits and formal wear. A few months ago I started surfing watches on various websites and noticed the Orient brand. A few weeks ago I found an Orient Producer second-hand on Ebay and got it really cheaply. The look (white dial and blue hands) really appealed to me, and have enjoyed wearing it with a suit and nights out.

I continued to look around for other dress watches and even wondered about buying a vintage Omega 1970/80’s Quartz model, but then found the Bambino range on line. I spent a bit of time doing some research and this particular model is nearly sold out, and many places (especially here in the UK) don’t stock it or are charging silly money. I took the plunge and ordered it on a Sunday, and the watch arrived at 8am the following Friday, all the way from the US. Very impressive.

The watch itself arrived in a Jiffy type padded bag which initially made me concerned about the knocks and bumps it may have received travelling several thousand miles from New York State. My worries were unfounded though, and the bag contained the Orient outer box (bit of a crease to a corner), the inner hard box, the Guarantee card and manual as well as the watch tag with model number. It was working out of the box – so must have had a relatively bumpy trip………

Initial impressions were the size. I know dress watches should come up small but on my 7 and 3/4 inch wrist, this 40.5mm watch didn’t look big. In fact, my first impression was it seemed small and certainly not nearly the same size as my Aquaracer (41mm). Maybe it was also due to my preference for bigger watches. I also think that looking at it on the wrist, the domed mineral glass edges encourages you to focus on the face and chapter ring, and somehow the outer edge and case seems to slip into the background - which makes the watch face appear smaller. Maybe it is just me……?

I know this particular mineral does scratch, so had a look around for a replacement sapphire and have found one for $45 from Singapore. I will probably look to get a local watch repair shop to change it in the future

Setting the time was easy due the hacking feature (this must have the F6722 movement? – I’m sure someone will correct me if I’m wrong), and the hand winding was positive, with just the right amount of resistance when turning the very nicely finished crown. The date setting is a nice complication to have; and you can sense things were moving in the watch internally when setting – reflecting its mechanical nature.
The appearance is definitely vintage – with the cream dial and Roman numerals harking back to a watch I remember my dad owning, and certainly brings to mind the classic dress watch qualities. The more modern twist of blue hands is what really appealed to me, and contrast nicely with the cream face. Looking closely at the dial, the applied Orient symbol creates a nice touch – but not sure it needs the ‘water resistant’ on the dial. Still, it’s written in small letters so no real problem with it. Nice combination of polished surfaces with matte elements, but I do think the crown would have looked better if signed too.

Now I know from all the reviews that the strap is seen as the weak point, but in all honesty, I have seen and owned worse. I was actually pleasantly surprised. Yes it is a bit shiny and certainly stiff; but the colour works with the watch and I’m sure it will ‘wear in’ with time. It feels OK to me in the hand, and I would certainly try it out on the watch for a few weeks to see how it shapes up. I did actually order another watch strap (Dassari?) to replace this one with, due to the poor reviews. Contrary to reports it isn’t too hard to find 21mm straps. It’s not here yet, and I’m sure I will use it, but think I’ll stick with the Orient for a while before replacing it.

Overall, I am extremely pleased with this watch. The Bambino and the Producer have re-invigorated my interest in watches and I suspect other Orients will be making their way to my collection over the coming months. If you have a Polaris GMT for sale – let me know!

In terms of the buying experience, I couldn’t be happier. Amazon marketplace delivered (literally) when it came to choice, price and speed. The declaration to Customs and the collection of import fees via the deposit scheme meant the watch didn’t get stuck and me being hit with import and handling fees from HMRC. I have bought from the US before and had watches get through under the radar as well as being hit with fees. For approximately £125 (August 2018) including postage and import costs, it is a bargain.

Spacecrab
5,0 su 5 stelle Professional good looks
Recensito nel Regno Unito il 25 dicembre 2018
Colore: CreamAcquisto verificato
Great watch in a classic sense: light weight, slides under a work shirt easily, looks good from all angles (check the effect the dome has). Good inhouse movement. What's not to like? There isn't lume here which is fine as that would ruin the blue hands which look great. I used to think it would be better at 42 mm but actually that would ruin the amazing balance it has. I do however with they hadn't bothered with a date window I think it'd be better without it and the odd strap size has kept me using the one it came with. That takes some time to loosen up and feels hard and "plasticy" at first. All in all I Love the watch.
Leggi di più

5,0 su 5 stelle Professional good looks
Recensito nel Regno Unito il 25 dicembre 2018
Great watch in a classic sense: light weight, slides under a work shirt easily, looks good from all angles (check the effect the dome has). Good inhouse movement. What's not to like? There isn't lume here which is fine as that would ruin the blue hands which look great. I used to think it would be better at 42 mm but actually that would ruin the amazing balance it has. I do however with they hadn't bothered with a date window I think it'd be better without it and the odd strap size has kept me using the one it came with. That takes some time to loosen up and feels hard and "plasticy" at first. All in all I Love the watch.
Immagini presenti nella recensione

Donald Mac
5,0 su 5 stelle Much more than a watch ....it's a timepiece!
Recensito nel Regno Unito il 3 maggio 2019
Colore: CreamAcquisto verificato
I'm a watch nerd and in my time I've owned them all from an Omega to an Alpha. That's why I can honestly say my Orient Bambino beige dial is the equal of any of watch I've ever owned.
It looks splendid.
It as accurate as a quartz
And no , the strap is not poor quality ,it's perfectly matched to the mood and tone of the watch. You know ,I'd nearly go as far as calling this watch a timepiece.
At 40 mm in diameter it's perfectly sized and wears like a 38mm...probably because when one raises one's shirt cuff to view the watch one's attention is focused on the beige dial and those lovely gunmetal-blued hands.
I could continue with this paen of praise,but I'll spare you,dear reader, from the pain.
My last word on this wonderful watch is DON'T EYE IT.. .BUY IT !
You'll simply adore it .
Leggi di più
4 persone l'hanno trovato utile
Segnala un abuso
Traduci recensione in Italiano

Amazon Customer
4,0 su 5 stelle A bargain for the American, but not the Brit.
Recensito nel Regno Unito il 21 gennaio 2018
Colore: CreamAcquisto verificato
It was a shame that we don't have 3D pictures of this timepiece, for it looks a lot better in reality than it does in the Amazon pictures. Its rate of going is extremely good and my watch gains 9 seconds a day. You will doubtless read elsewhere that this can be improved upon and some are accurate to within 3 seconds a day. Most buy such a watch for its longevity and being trouble free. In the States this watch is £170. In the UK it is nearly double that. For the Brit, it is overpriced. For the American, it is an absolute bargain! It is a really lovely timepiece.
Leggi di più
6 persone l'hanno trovato utile
Segnala un abuso
Traduci recensione in Italiano
Visualizza tutte le recensioni
Consegne illimitate in 1 giorno
Iscriviti ad Amazon Prime: consegne senza costi aggiuntivi in 1 giorno su 2 milioni di prodotti e in 2-3 giorni su molti altri milioni, film e serie TV su Prime Video, incluse le serie Amazon Original, più di 2 milioni di brani e centinaia di playlist senza pubblicità con Prime Music, centinaia di eBook Kindle su Prime Reading, accesso anticipato alle Offerte Lampo di Amazon.it e spazio di archiviazione per le foto illimitato.
> Scopri