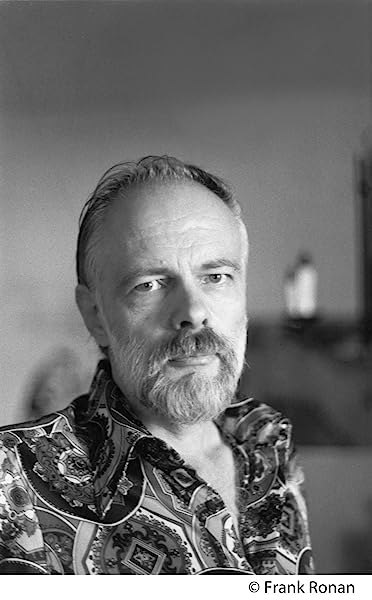 What is VALIS? This question is at the heart of Philip K. Dick's groundbreaking novel, the first book in his defining trilogy. When a beam of pink light begins giving a schizophrenic man named Horselover Fat (who just might also be known as Philip K. Dick) visions of an alternate Earth where the Roman Empire still reigns, he must decide whether he is crazy or whether a godlike entity is showing him the true nature of the world. VALIS is essential reading for any true Philip K. Dick fan, a novel that Roberto BolaÃ±o called "more disturbing than any novel by [Carson] McCullers. " By the end, like Dick himself, you will be left wondering what is real, what is fiction, and just what the price is for divine inspiration.

Viatora
5,0 su 5 stelle Each one is so different from the other and make for great debates- David is deeply religious
Recensito nel Regno Unito 🇬🇧 il 3 agosto 2017
Acquisto verificato
I can't even think of the proper congregation of words by which to express the brilliance of this book the way it deserves. Compared to Dick's other novels, this one is clearly a vulnerable one for him, it's deeply personal even though it doesn't seem as if it's about him, and it follows a deeply thoughtful, heartbreaking and mindblowing quest to explain what made him have a divine revelation. Dick exhausted a lot of time doing research in theology and mythology and the way it is brought up in the story is absolutely enchanting. The characters and story, beyond the mere quest, are so very well done. Each one is so different from the other and make for great debates- David is deeply religious, Kevin is a caustic cynic, Sherri survives cancer but she wants to die. Then there's the two sides of the same coin, Horselover Fat and Philip (K Dick). I'll let you think about that one, but better you follow up with the book.
I could not put this book down, I read it in a day, I even forgot to drink my coffee. Personally, I never expected such genius from Philip K Dick, well, in this manner. He's damn good at sci-fi, but this is beyond simple sci-fi. I never thought this would become my favourite novel.
Leggi di più
16 persone l'hanno trovato utile
Segnala un abuso
Traduci recensione in Italiano

John M
3,0 su 5 stelle A strange and unsettling read. Semi-autobiographical, so really for PKD fans rather than mainstream SF
Recensito nel Regno Unito 🇬🇧 il 10 gennaio 2018
Acquisto verificato
This is a seriously strange book, and really quite an unsettling read in places.
PKD is well known for his very many creative SF novels which are the product of a unique imagination, and that some of his work is influenced by the 1960s drug culture. He suffered from episodes of psychiatric illness with a psychotic episode in 1974. This is the basis of much of the novel Valis which is semi-autobiographical where he examines the causality and nature of his experiences through his alter ego Horselover Fat ('Horselover' being a translation of 'Philip' from Ancient Greek, and 'Fat' the translation of 'Dick' from German).
The novel can be read on many levels and raises a number of thought provoking angles, such as the nature of reality and delusion, and the basis of religious belief. PKD's writing cleverly draws the reader from the perspective that Horselover Fat is psychotic to the possibility that he may actually be chosen by Valis to reveal higher truths, and in this lies some ambiguity. In places it reads like a satire on religious beliefs and cults. There is also some scattering of black humour, particularly from his encounters with his Israeli counsellor.
However despite this, I found the start slow and difficult to read in places with too much rambling metaphysics and philosophy. This is really for the fans of PKD rather than those in search of a more mainstream SF novel, hence the 3-stars; quite a difficult book to judge.
Leggi di più
7 persone l'hanno trovato utile
Segnala un abuso
Traduci recensione in Italiano

Natalie B
4,0 su 5 stelle Interesting, rich read but needed more...Where are the Sumerians?!
Recensito nel Regno Unito 🇬🇧 il 9 dicembre 2018
Acquisto verificato
I cannot fault the amount of research and thought put into this novel. He brings together works of greats from all media... philosophy, science and art (including theatre). This is probably the most I've had to re-read out of all the Philip K. Dick books since he actively states works that have affected the themes in his books.

However I disagree with a couple of points in his plot. He SHOULD have integrated the Ancient Sumerians & their religion. I'm actually shocked (REALLY!!!) he didn't especially how extremely well it could have fit into this book & its plot/themes. These additions would have made this book so much richer & PHILOSOPHICALLY MIND-BLOWING than it already is for me personally...ESPECIALLY since the Sumerians ARE a basis for the most followed religions!

Side note: Philip also could have added the ancient mysterious peoples of Gobeklitepe (12,000 years ago)... for my reason why to add these mysterious peoples? well it's a spoiler so I can't say here. But their religion and purpose of being is so shrouded in darkness... so much playing around could have been done :)
Leggi di più
2 persone l'hanno trovato utile
Segnala un abuso
Traduci recensione in Italiano

A. C. Phipps
5,0 su 5 stelle An amazing novel
Recensito nel Regno Unito 🇬🇧 il 13 marzo 2015
Acquisto verificato
I just loved this book. I'm a committed Phil Dick fan and it all started when I saw the movie "Total Recall" and found out it was from a short story by him. From there I went on to reading more and more of his stories and then the novels. He has a wacky sense of humour, sometimes dark, but with some real lol moments. This particular novel works on so many different levels and he manages to include some of the real basic ideas of philosophy and religion in it too, so it's very educational as well as being entertaining as a novel. This story mixes in fiction, autobiography and his own very personal cosmogony. Glad I got it and will doubtless read it again.
Leggi di più
5 persone l'hanno trovato utile
Segnala un abuso
Traduci recensione in Italiano

Richard Alibon
3,0 su 5 stelle Not Really a Science Fiction Novel
Recensito nel Regno Unito 🇬🇧 il 31 gennaio 2014
Acquisto verificato
I have been a Phillip K.Dick fan for many years but I find Valis really hard to get into. I'm up to page 41 and so far it's not really been a novel but more of a (rather turgid) philosophical discourse, and no science fiction either. I persevered this far because other people have given it good reviews but I'm about to give up on it. And it's one of a trilogy!
Leggi di più
5 persone l'hanno trovato utile
Segnala un abuso
Traduci recensione in Italiano
Visualizza tutte le recensioni